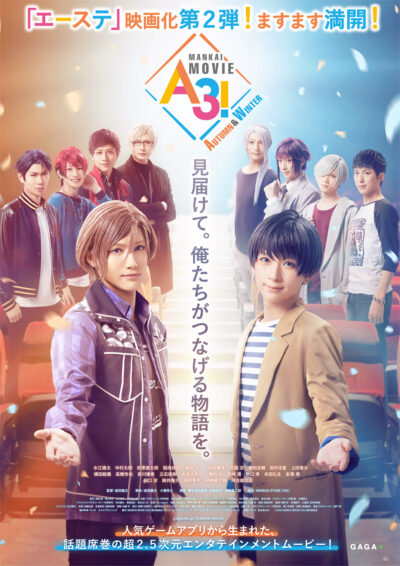 “Director! Please make our talent blossom!”
Veludo, a suburb of Tokyo, is a mecca for actors and home to many theatre companies along its famous Veludo Way. The film audience’s point of view will overlap with that of the female POV character, a former actress who steps foot in this town after receiving a mysterious letter. There, she encounters a theatre company drowning in debt, with no audience, only one actor and on its last legs. She unexpectedly becomes the director of the theatre to try and bring it back to its original glory.

＝What is MANKAI STAGE “A3!” ? ＝
“A3!”, acronym for “Act! Addict! Actors!”, is a popular smartphone app game from Japan, where the player trains their very own troupe of actors and makes stage performances a success to restore a theatre group on the verge of bankruptcy, the MANKAI Company. Since its first release in 2017, the game has been downloaded more than 7 million times. In addition to collaborating with shopping and entertainment facilities, the game has been made into anime and a variety of merchandise and CDs, enjoying enormous success across a wide range of media. The stage adaptation, MANKAI STAGE “A3!” (2018) became well-known across Japan, lovingly nicknamed “A-Ste” (A-stage) by its large fanbase. Since the first stage adaptation in 2018, a series of six shows were produced.